I think this is the most obvious and mysterious question at the same time because most wetsuits are made from neoprene (rubber). But at the same time, there are so many differences between what material is used to make the neoprene and how it is used to get the best quality.

In general, wetsuits are made from neoprene or rubber. Most of the high-end wetsuits use the neoprene type made from limestone. It is more flexible, durable, and more environment-friendly than oil.

Neoprene is a synthetic rubber (also called polychloroprene, CR Neoprene “Chloroprene Rubber” or “CR”) and is produced by carbon and hydrogen atoms. It is the most used rubber for wetsuits because it has a lot of advantages. These are all good qualities of neoprene here below:

What substance is neoprene or rubber made of?

Neoprene is made out of carbon and hydrogen atoms. The main ingredient for neoprene is carbon (calcium carbonate) which can be derived from different sources. See below.

Petroleum-based neoprene is the more traditional way of making neoprene and is not really environment-friendly. Also, they say the quality of the neoprene is less.

The more modern way of producing neoprene is limestone. Yamamoto is a well-known Japanese company that produces this type of neoprene. Geoprene and Yamamoto neoprene are both limestone-based. The stones are mined in Japan and are more eco-friendly.

Bioprene is a form of CR neoprene manufactured by using calcium in seashells as the major ingredient instead of oil or limestone.

Natural rubber (bio-based) is used in a completely different way to make wetsuits. Natural rubber, also known as caoutchouc in the region, is a substance made from the latex sap of rubber plants. It is mostly made up of polymers generated from the chemical component isoprene and water. Rubber trees may be found in tropical locations all over the world.

This is also a synthetic rubber but has fewer elongation capabilities and is hardly sun or chemical-resistant. So not a really good choice for wetsuits because you use the wetsuit most of the time in the sun. This type of rubber is mostly used in car tires.

How is neoprene made?

The polychloroprene rubber chips are then melted and mixed together with foaming agents and black carbon pigments, and they infuse the melted substance with air bubbles and bake it into a block of neoprene foam. Then they slice this block of neoprene foam into any thickness they want.  This contains thicknesses ranging from 0.4mm to 10mm and anything in between.

What is the best neoprene?

The best neoprene would give the wetsuit the best qualities like warmth, strength, flexibility, and durability. Every brand has its own way of producing neoprene with combinations of different materials and chemical processes.

I think the most used neoprene, the limestone-based neoprene would probably be the best one. It is mostly used in high-end wetsuits and they say it has better qualities than the others like:

Is there more than one layer of neoprene?

Yes, most wetsuits include a single layer of neoprene with varying thicknesses in different areas of the wetsuit. But all the wetsuits have different ways of lining. The linings can be on both sides of the neoprene to protect it from damage.

It is called single-lined because one side (the inside of the wetsuit) of the neoprene is lined with nylon or polyester or something different like jersey, and the other side is raw neoprene. Single lined neoprene is mostly used around the chest and back and is called Smooth Skin Neoprene (also called mesh or glideskin). This way of neoprene keeps you warmer and keeps the wind and water out and the inside is soft and warm.

The following materials are used on the inside and outside of the neoprene: 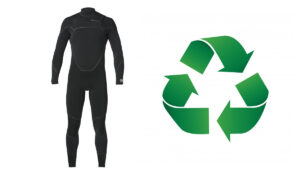 Wetsuit Recycling is Important (8 Ways YOU Can Recycle) How Rubber is Made (The Simple Version)